“There was a recent study by the Smithsonian, that found that bacteria on your pillowcase is indistinguishable from that found on a toilet seat,” says Jordan Schindler, the founder of TexDel, a textile-based drug delivery company headquartered in Conover, NC. “Pretty gross,” he adds.

Schindler, as a young college student, had been instructed by his dermatologist to wash his pillowcase three times a week. He admitted to himself that it was never going to happen, so he approached the problem in a different way: if his face was going to be pressed against the same piece of fabric night after night, why shouldn’t that fabric deliver a benefit?

He began to do some research, and found an existing technology wherein yarn was coated with essential oil microbeads that released their contents onto the skin under pressure. Schindler began producing a pillowcase coated with tea tree and lavender oil microbeads, which treated the skin and aided relaxation as its owner slept.

Schindler quickly saw, however, that the microbead technology had limitations. “It washes out over time, you can’t control the release, and you can only incorporate specific ingredients,” says Schindler. He cleared that hurdle by adding another innovator to his team: a drug-delivery scientist whose unique process of applying active ingredients to yarn has become the foundation for TexDel’s new, patented technology.

But the company soon faced another, different challenge.

“We didn’t know how to actually commercialize the idea,” says Schindler. “We thought that we could send a foot of yarn to North Carolina and they could turn it into a sock.”

Such misconceptions are common, according to Dan St. Louis, the Manufacturing Solutions Center’s (MSC) director. “Entrepreneurs totally discount how hard textiles is,” says St. Louis. “They think, ‘Oh, I can google it.’ You can’t google
experience.”

Schindler relocated his company’s headquarters from Seattle to the MSC Incubator in Conover, NC, in 2016. As he got busy setting up a pilot line for TexDel’s patented coating technology, he found that close proximity to all that experience has been invaluable.

“A lot of the cost savings that we’ve experienced here have been primarily a result of the expertise and the experience that we get here,” says Schindler. “For example, we were going to buy a $250K piece of equipment that we thought we needed to commercialize this technology, and we got here and they said, ‘Whoa, whoa, whoa. You don’t need that.'”

Time to market has been drastically shortened as well, because TexDel no longer has to wait for the samples to cross the country to be tested and validated at MSC.

Schindler says that TexDel’s relationship with MSC also helped the company raise more than $2 million in capital through angel funds and other strategic partners, and secure a 200K grant to develop the line at MSC.

St. Louis, in turn, shares the credit with MSC’s numerous partners. “The relationship with NCMEP means a lot to MSC,” says St. Louis.

“Because it means we can bring a whole arsenal of other services. I can bring in folks from the Polymers Center if somebody has a question on plastics. We work really closely with the College of Textiles at NC State, and with the MEP and with
Gaston College.”

This year, Schindler is working toward bringing a cooling sock with pain-relieving capabilities to market. His long-term goals are much larger; he hopes that, in time,TexDel technology will incorporated into every garment, everywhere. “Why can’t your health and wellness goals be achieved by the clothing you wear?” he asks. “Why can’t you have
energy—caffeine—in your steering wheel to keep you awake when you’re driving? That’s where we think the future of this goes.”

Polymers Center for Excellence helps bioplastics accelerate into the market 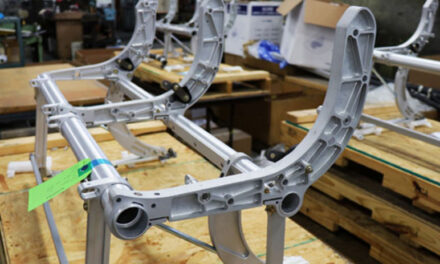